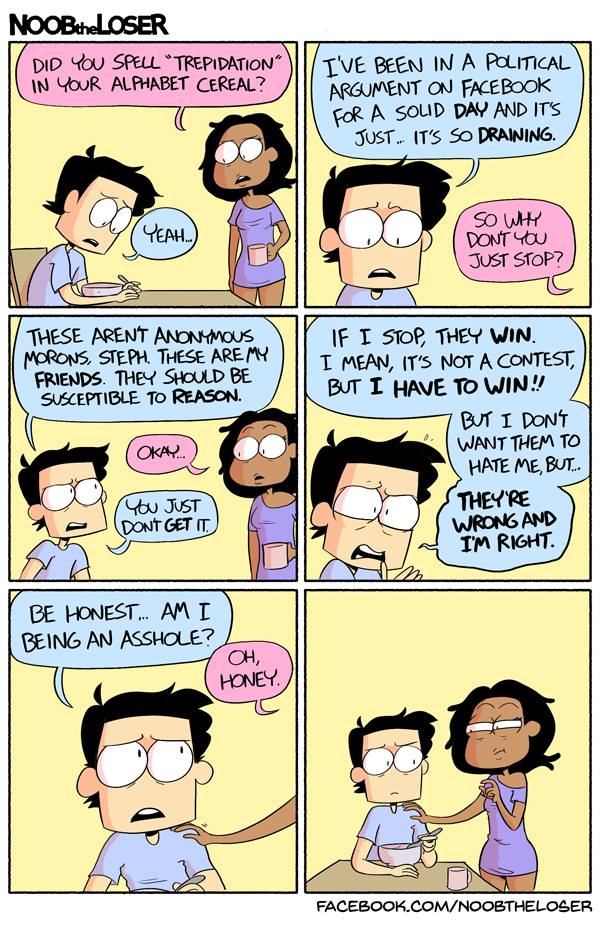 By the time I was done, I wanted to have an easy way of referencing it, because I get this a lot.

People always think this is where these prolonged arguments come from - that it's just some desperate need to be right. But that's really not always the case. The fact of the matter is that when a thought or idea is trending, that thought or idea started somewhere. A hundred thousand people – a few MILLION didn't suddenly agree to an idea all at once and decide to change the status quo view of things.

Now before you go thinking that I think I'm starting a revolution by arguing on Facebook; that's not really it. It's less that I'm trying to *start* something than it is that I'm trying to *shut something down* before it gets out of hand. I feel the reason there are so many incredibly stupid ideas and philosophies that seem so prevalent out there is because one or two people got these stupid ideas, share them…and then no one bothered to point out why those ideas are so absurd. Everyone with the common sense to see the flaws in these arguments decided that pointing out these flaws “was beneath them” and “not worth their time.” As a result, no one saw the very logical counterpoints to these ideas. The only thing they saw was the ideas themselves, and maybe some trolls responding with “lol that’s gay” which just galvanized them further, until it reaches the point these stupid ideas become part of the status quo, and it’s too late to challenge them, because they’ve become so embedded in people’s minds that they won’t listen to any dissent.
I don’t think that people understand how much power the internet, and the people *on* the internet, have to change how society thinks; how much of a role seemingly unimportant things like Twitter and Facebook have played in the present collective philosophy of our society (in case it’s not clear, I’m primarily speaking for America and Canada here, but I’m sure most of this applies to plenty of other Western countries). All those stupid little things we roll our eyes at because so many people are doing it, the truth is that when a lot of people see an idea gaining steam, they hop on the bandwagon and parrot the idea themselves, which gives said idea even more exposure, which influence more people, and so on until it becomes the defacto status quo.
I feel like if everyone who disagreed with something said “who cares, it’s just Facebook?” Made their thoughts and opinions know, if everyone who still had common sense actually expressed that common sense in the same way that people without it did, we’d be in a better place collectively.
TL:DR; Think of it this way. To those of you who think you’re “taking the high road” by not responding to all these things on: all those people who rant on Facebook? The ones at whom you roll your eyes and marvel at how ridiculous they and their terrible ideas are? Thanks to your silence, THEY are the only ones who are actually being *heard.* Thanks to your silence, THEY become the defacto voices of America. THEY are the ones who are being seen as representative of your country. Not because they have the BEST ideas. Not because their ideas are held by the majority. Because you were provided with a platform unprecedented in human history for getting your voice heard, and you didn’t think it was worth your time to USE IT
Collapse